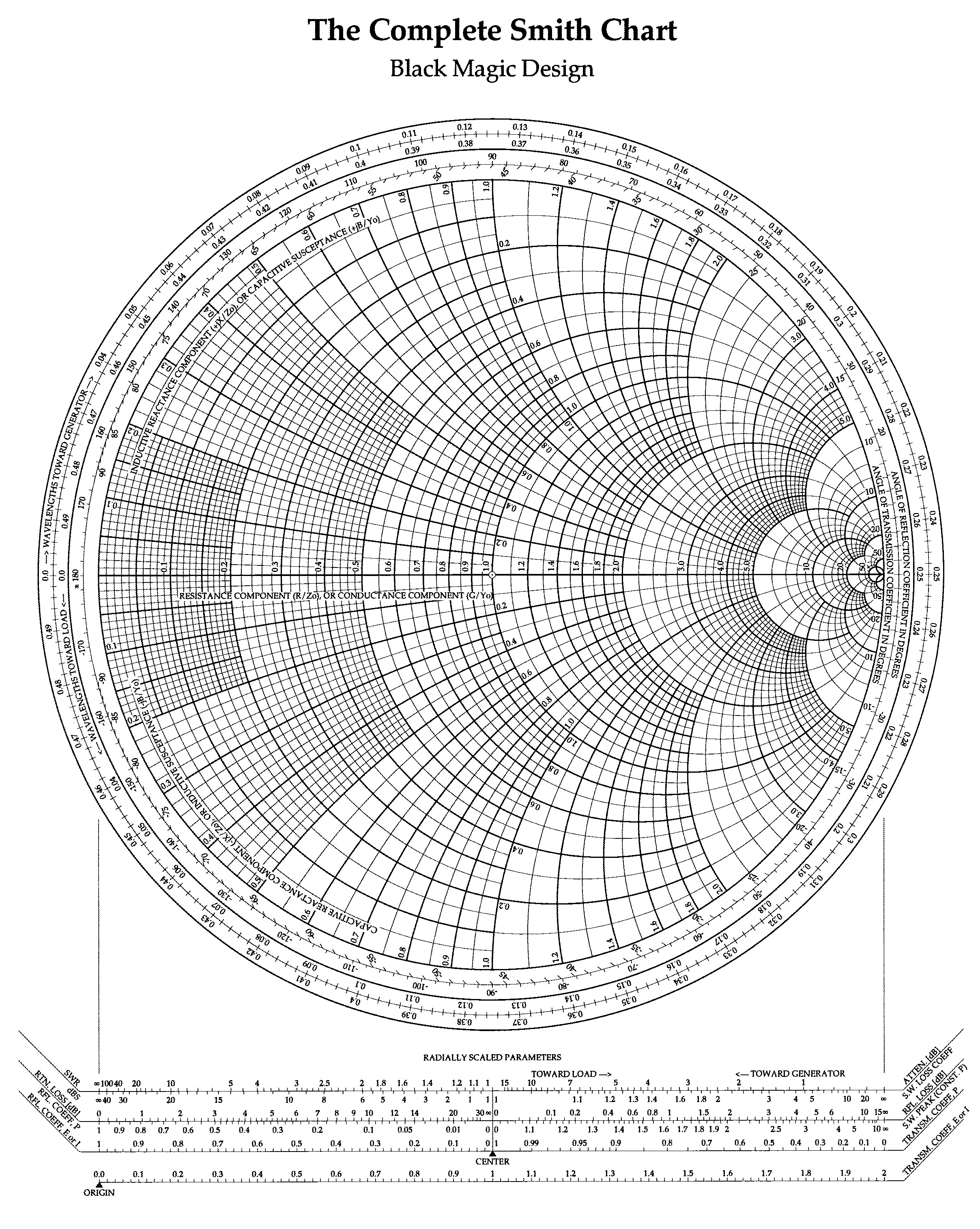 The chart was invented by Phillip Smith in 1939 while working at RCA in the United States. Smith once said, “When I can use a slide rule, I’m interested in graphically representing mathematical relationships.”

The basics of the Smith chart lie in the following formula.

where Γ represents the reflection coefficient of its line

That is, S11 and ZL in the S-parameter are the normalized load value ZL / Z0. Among them, ZL is the load value of the line itself, and Z0 is the characteristic impedance (intrinsic impedance) value of the transmission line, usually  50Ω  is used.

The circular line in the chart represents the real value of the electrical impedance, that is, the resistance value, and the horizontal line in the middle and the lines radiating upward and downward represent the imaginary value of the electrical impedance, which is generated by the capacitance or inductance at high frequencies. Resistance, where upwards are positive numbers and downwards are negative numbers.

The middle point of the graph (1+j0) represents a matched resistor value (ZL), and its reflection coefficient value will be zero.

The edge of the graph represents the length of the reflection coefficient of which is 1, which is 100% reflection.

The numbers on the sides of the graph represent the angle (0-180 degrees) and wavelength (from zero to half wavelength) of the reflectance.

Some graphs are expressed in admittance values, which can be rotated 180 degrees from the impedance version above.

Simply speaking, it is similar to a mathematical table, and the value of the reflection coefficient is known by searching.

First, you need to understand what the impedance of a resistor, capacitor, and inductor is.

In circuits with resistance, inductance, and capacitance, the resistance to current flow in the circuit is called impedance.

(The ideal resistance is a real number, not involving the concept of complex numbers).

Description: The load is a complex of three types of resistance, inductive reactance of inductance, and capacitive reactance of capacitor. After the combination, it is collectively referred to as “impedance”, which is written as a mathematical formula:

Impedance formula, it is no longer a real number. It becomes a complex number because of the existence of capacitance and inductance.

As the signal travels along the transmission line, it experiences a transient impedance at every moment, which may be the transmission line itself or other components in the middle or at the end. For the signal, it doesn’t distinguish what it is, only the impedance is felt by the signal. If the perceived impedance of the signal is constant, then it will propagate forward normally, as long as the perceived impedance changes, no matter what causes it (maybe resistance, capacitance, inductance, via-holes, PCB corners, or connectors encountered halfway through), the signal will be reflected.

An important indicator to measure the amount of signal reflection is the reflection coefficient, which represents the ratio of the reflected voltage to the original transmission signal voltage.

To reduce the number of unknown parameters, it is possible to fix a parameter that occurs frequently and is often used in the application. Here Z0 (characteristic impedance) is usually a constant and a real number, and is a normalized standard value that is commonly used, such as 50Ω, 75Ω, 100Ω, and 600Ω.

The Smith chart is used for impedance matching between high frequency circuits.

Impedance represents the resistance ability of a circuit to electricity and is a vector. The impedance value is a complex number.

Impedance matching is one of the basic requirements for circuit connection. Impedance mismatch will cause the circuit to work inefficiently, work abnormally, or even burn directly.

For the impedance matching of high-frequency circuits, to be simply put, the input resistance and the output resistance are purely resistive, such as equal to 50 ohms or 75 ohms.

The main purpose of the Smith chart is to calculate the parameter values of the capacitors and inductors connected to the circuit. The second is to display the frequency-impedance characteristics of a circuit.

Impedance matching is a part of microwave electronics. The load impedance and the internal impedance of the excitation source are matched with each other to obtain a working state of maximum power output.

It is mainly used on transmission lines to achieve all high-frequency microwave signals transmitted to the point of load, and no signal will be reflected to the source point, thereby improving energy efficiency.

For circuits with different characteristics, the matching conditions are different. In a pure resistance circuit, when the load resistance is equal to the internal resistance of the excitation source, the output power is the largest, and this working state is called matching, otherwise it is called mismatching.

The Smith chart is equivalent to a map. Each point on it represents a impedance value in plural form. The center of the circle is called the matching point. It generally represents an ideal impedance of the real  50 ohms and the imaginary 0 ohms.

Impedance matching is to plan a line from the impedance point to the matching point.

In simple terms, it is to look at one line, two arcs and two circles.

The middle point of the resistance line is the center of the circle, which is the standard resistance value, usually  50 ohms .