Introduction of base station and Remote Radio Unit

Base Station，generally refers to the “public mobile communication base station”, (abbr.: BS), the base station is used to provide signals to mobile phones. It usually consists of the following four parts:

Antenna-Feeder System：Responsible for signal transmission and reception, including antennas and feeders.

Remote Radio Unit：Responsible for signal generation and extraction, which is the most important part.

Baseband unit: responsible for information processing, the core of the core；

Supporting system: Provide support for the systems above, including towers, BS rooms, power supply, air conditioners and other equipment. In the 2G and 3G eras, the base station is divided into two layers.

In the 4G LTE era, the two layers are simplified into one layer and become a standalone eNodeB.

Taking eNodeB as an example, it generally includes the following components: 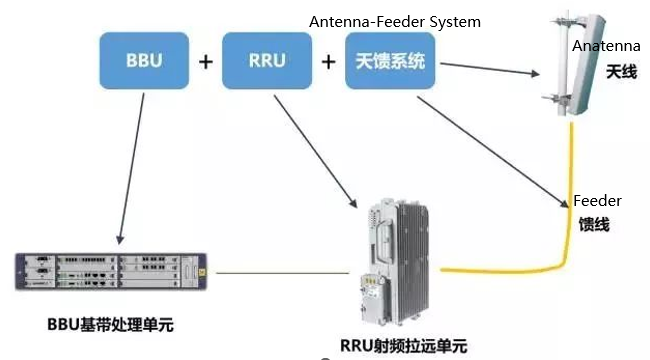 Most base stations still do not need special towers, and can be built directly on the existing roof.

Generally, you see a row of plate-like objects that are erected and slightly inclined downwards on the roof, which is the antenna.

In places where houses are scarce, communication towers for base stations are specially built. At the top of the tower, there is a circle of rectangular plate-shaped things shining brightly, which is the antenna. 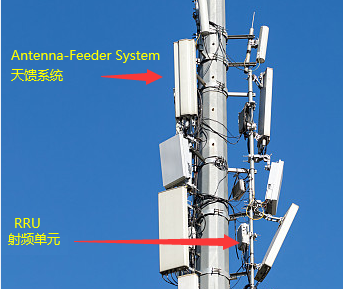 Antennas are used to send and receive signals. It can focus the signal sent from the radio frequency unit in the correct direction and send it to the mobile phone. It can even use the electromagnetic beam formed by the signal to move with the mobile phone like the light beam of a flashlight and transmit it accurately.

In addition, it can sense and receive weak signals from mobile phones, collect these signals and send them to the radio frequency unit to extract information from them.

Generally speaking, a base station contains three antennas, each of which transmits signals in a 120-degree direction around the periphery, together by which can provide 360-degree seamless coverage.

The black cable extending downward at the bottom of the antenna is the feeder, which is used to connect the radio frequency unit and propagate electromagnetic waves to the antenna, forming an Antenna- Feeder system together with the antenna.

Like the appearance of the air conditioner as shown below

Or beautify trees, usually installed in parks, woods and other scenes. 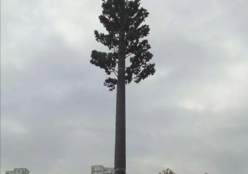 Rural areas, highways, high-speed railways, scenic spots and other scenes are basically iron towers, that is, the base stations known to the public. 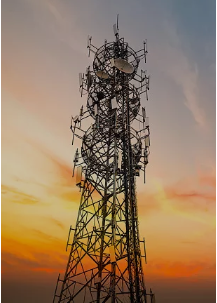 There is also one that is mainly used in indoor environments such as garages and aisles, and the professional name is indoor distribution. As shown below 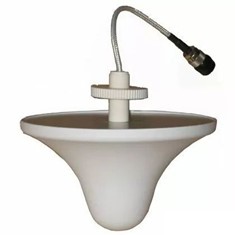 In addition to the antenna tower, the base station can also be a sewer cover. 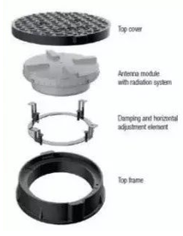 Going down the feeder connected to the antenna, we can see the silver box hidden behind the antenna, which is the Remote Radio Frequency unit. 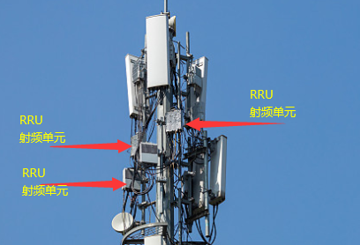 Usually, the RRU is abbreviated as: RRU (Remote Radio Unit), it is also referred to as RRH, or RFU. 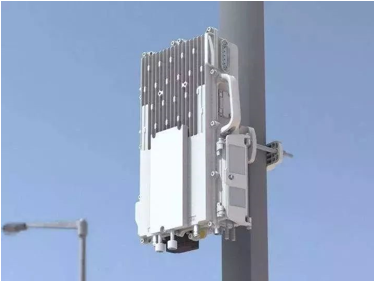 Why is it called “remote”: Because the Remote Radio Unit (RRU) and the Baseband Unit (Abbr.:BBU, to be mentioned later) work together, but the BBU locates in the base-station room under the tower, while the RRU is hung high on the tower, relatively far from the BBU.

RRU is mainly responsible for the generation and extraction of wireless signals.

The generation of the signal is to convert the information to be sent into electromagnetic waves, and then transmit it to the antenna through the feeder, and then it can be launched into the air.

Signal extraction is to combine several weak mobile phone signals received by the antenna, remove the influence of interference through various methods, and extract useful information from it and send it to the baseband unit for processing.

The RRU can be divided into many modules, which are respectively responsible for the transmission of 2G, 3G, 4G and even 5G signals.

So, with so many signals sent on a huge iron tower, will the power be very large?

In fact, the maximum transmit power of an RRU is always like 80 watts, 120 watts, or 160 watts. Please note that these are the peak power, which doesn’t run fully under normal circumstances, and the signal strength transmitted during idle time is even smaller.

Although from 2G to 5G, our technology is getting more and more advanced, and the frequencies that can be used are getting higher and higher, but the radiation of base stations is constantly decreasing.

The reason is that the size of the base station has become smaller.

The picture below shows the comparison between the base station in the 2G era and the one in the 5G era .

In the 2G era, a base station need to cover all signals within 10 kilometers, the power of the signal transmitter must be very large.

However, in the 5G era, the frequency is high, the wavelength is short, and the diffraction ability is insufficient. The control range of a base station is only 100~300m, so each base station is very miniature, and the size is similar to a document suitcase or router for example, which can be installed in Pole or hanging on the wall directly, or even in the sewer.

The power of this 5G base station is only about 10 watts.

Our country sets a very strict standard for the power of communication base stations, far higher than the US and EU standards, only 40 microwatts/square centimeter, while the Japanese and American standards are 600 microwatts/cm2, and Europe is 450 microwatts/cm2.

Leaving the RF unit and going down the power line, you will arrive at the most critical part of a base station.

The function of the Communication Equipment Room is to provide protection, power supply and air conditioning cooling for the internal core equipment, that is, the baseband unit.

The base station usually has an equipment room, which can be indoor or outdoor according to specific needs.

The normal operation of the equipment room requires the support of many supporting resources.

The BBU, power supply, and transmission equipment must continuously dissipate heat when they work. The accumulation of this heat will cause the temperature to rise. If the heat is not dissipated in time, the BBU will work abnormally.

Base Band Unit: core of the base station core

The role of the BBU is to complete the processing of the original information, and then send it to the RRU to generate a radio signal, before sending it to the mobile phone through the antenna.

In turn, the signal sent by the mobile phone is also received through the antenna, after preliminary processing by the RRU, and finally reaches the BBU to extract the information.

Usually BBUs are placed indoors (that is, in the equipment room).

There are usually also rack power equipment and transmission equipment in the cabinet.

BBU, RRU and Antenna Feeder are the core parts of the base station. Through the coordinated work of each part, the functions such as sending text messages and Internet communication are completed.

Each base station is connected into a mesh to achieve seamless coverage of communication services. 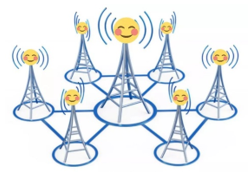 It is a signal repeater used to amplify the uplink and downlink RF signals.

It can solve the coverage problem of the weak area of the signal blind area.

Repeaters are mainly cheap, and the cost is much lower than that of a base station. 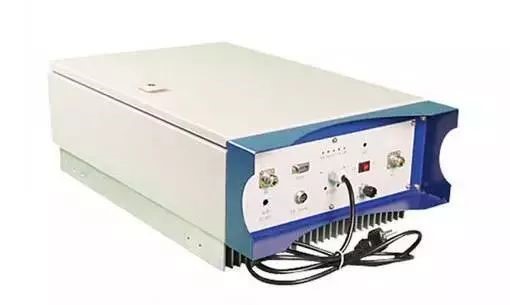 Indoor signal coverage has always been a problem that needs to be solved. Since base stations are generally built on the roof, outdoor and other heights, once people enter the building, the mobile phone will easily lose signal, especially in basements, parking lots, and elevators.

Therefore, for the indoor environment, an indoor distribution system will be specially arranged, referred to as “room distribution“.

“Room distribution” is actually the secondary relay and enhanced coverage of the signal. The feeder is connected from the source (such as a microcellular base station or repeater), and then goes to each room or channel, and then uses the antenna to send out the signal. 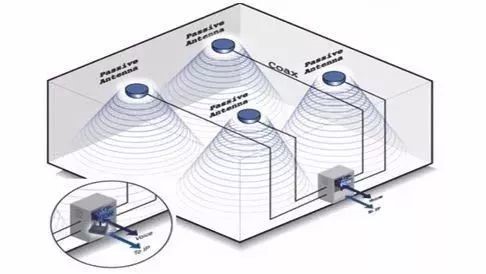 Common omnidirectional ceiling antennas such as “room division” below: 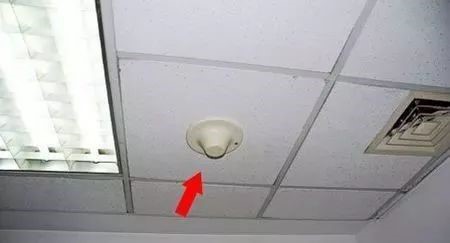 Or the panel directional antenna, which can be installed on the wall. 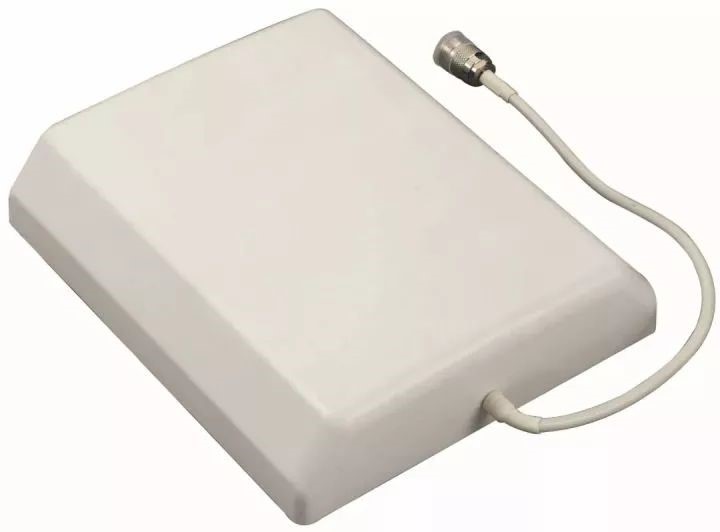 Nowadays, base stations are developing towards miniaturization, that is, the combination of BBU+RRU

The advantages are that it does not occupy space, energy saving and environmental protection, and the deployment is convenient and fast. 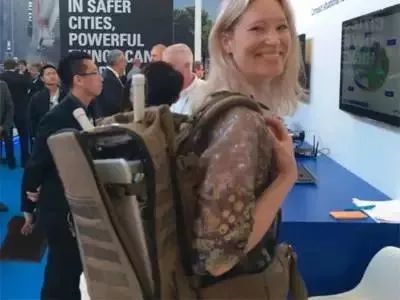 Home base station Femto, which means “one thousandth of a trillion” in English, is a low-power home base station with small coverage. The size is equivalent to a WiFi router. 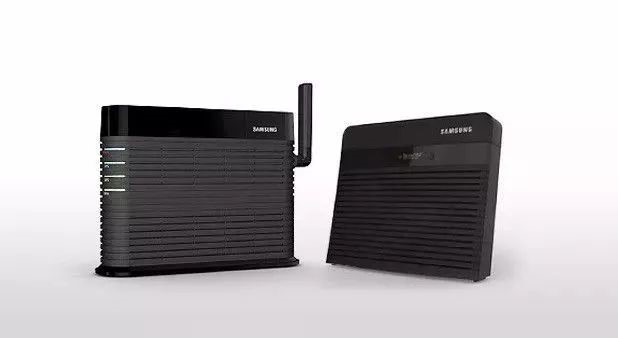 “China Tower” is established to be responsible for the infrastructure construction of base station sites specially.

Because if major operators build their own base stations, it is easy to cause high costs and waste of resources. 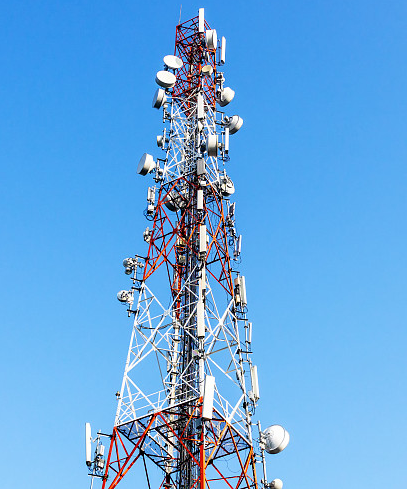